Congratulations to the Class of 2019!

The Electrical JATC of Southern Nevada is pleased to announce the 2019 annual graduation ceremony was held on May 11th, 2019 at the IBEW #357 Union hall. The apprentices and guest were addressed by guest speaker Congresswoman Dina Titus. A Dinner sponsored by the Southern Nevada IBEW/NECA LMCC followed the ceremony later that evening at the Culinary Academy of Las Vegas. 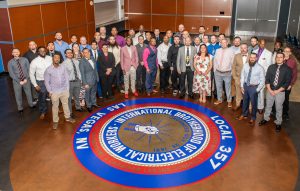